During the summers of 2005-2007 the least weasel (Mustela nivalis nivalis) near Mys Vostochniy, NW Taimyr, Siberia, was studied in relation to the fluctuating abundance of the Siberian lemming (Lemmus sibiricus). The number of lemmings largely determines the reproductive success of birds and predatory mammals on the tundra. The 2005 expedition to Mys Vostochniy occurred in a peak lemming year and was the only one out of nine carried out in the preceding 14 years in which least weasels were observed. They were abundant on the mainland, but were not observed on the nearby islands. A search plot of 1.5 ha was selected in order to gain an impression of the intensity of the predation on lemmings by weasels. 107 lemming winter nests with a diameter of ≥14 cm were found within the search plot, of which 52% showed signs of predation by weasels. Smaller lemming nests showed no signs of predation. This predation of lemmings corresponded with about 127 days on this particular search plot over winter, suggesting the presence of just one weasel. In 2006 no new lemming winter nests were built on the search plot. 6.5% of the lemming nests (n=92) checked in the wide surroundings showed signs of predation by weasels, indicating a continuing but limited presence of weasels in the winter of 2005-06. However, no weasel was spotted in 2006. In 2007, a build-up year of the lemming cycle, 36 new lemming winter nests were found within the search plot, but none showed signs of predation by weasels and no signs of the presence of weasels were found outside the search plot. In 2005 we found some dead weasels and we were able to catch others. We collected these data as we had found no published data about weasel from the Taimyr-part of Siberia. The weight of two males in moulting coat exceeded the maximum weight mentioned in the literature, and this was presumably related to the optimal food situation during the lemming peak in the spring of 2005. Two females were checked for litter size, 14 and 10 respectively. The reason for the sudden abundance of weasels near Mys Vostochniy in 2005 remains unexplained; either the first animals moved in from the south at the beginning of the lemming peak, or there was a very small, and hence hitherto unnoticed population, which was able to suddenly flourish. Weasels do not seem to have a major function in maintaining the multi-annual cycle of lemmings in Taimyr. 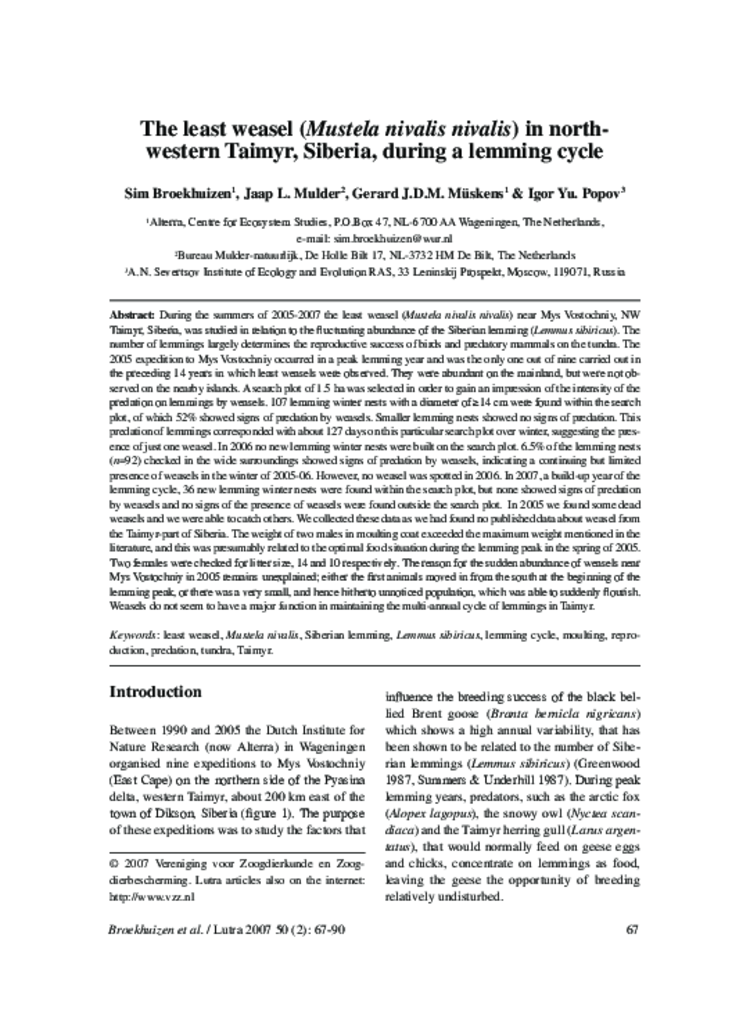